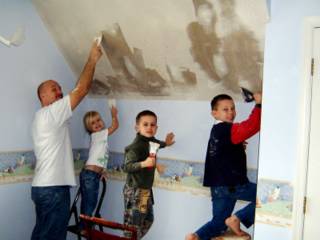 We began a new project today: making a bedroom for Emma Grace. She has had her own room for over a year, but inherited it “as is” from her brothers. After having Nana live in it for three months, followed by Aunt Emmy and Uncle Janke and then OjiSan and GranSue for other visits, we decided that we needed to make it official. And so today we began the redecorating process, stripping the textured plaster from the sloped ceilings of the room.

It was a family project, begun right after breakfast. Bill supplied scrapers for everybody, we spread sheets on the floor, popped a new Veggie Tale cd in the player, and sprayed the ceiling with warm water. Then everyone began to scrape the “chunks of evil” (Bill’s designation for the crud on the ceiling) away.

It went very well. Amazingly well. I couldn’t believe how easily it came away. It was so satisfying and easy that the children remained enthusiastic participants to the end, despite the chunks of evil raining down on their heads. There wasn’t room for all five of us to work, so I stood back and took pictures.

The next step is stripping the wallpaper border off. That won’t be quite so easy.

Ok you don’t allow anoymous comments so I was FORCED to login. This coming from the always anonymous commenter. Your blog is great. You are all having so much fun that I ALMOST want to join in and help.. ALMOST.
I look forward to your future posts.

Ok one more comment and then I am finished for the day. That stuff truly is Evil and who ever invented it was also evil. Unlike the person who evented the bagless vacuum who was pure goodness.

I didn’t know that I don’t allow anonymous comments. I never noticed a choice being offered in that respect. Well, it’s another quirk that I’ll need to work out. Sorry about that.

As for the bagless vacuum, well, I was forced to buy a new vacuum today, and it is bagless, and I am very, very happy.

How convenient that there wasn’t room for 5 people to work!

And congratulations on your blog! I can’t wait to see what else you put up here!

Hello, tworivers! How delightful of you to comment, too! This is going swimmingly!

Yes, I was glad to be able to take pictures. We’ll probably have a few more “during” shots, but it’s the “after” ones that I’m really looking forward to.

Aha!! Tell Beth that anonymous posts can indeed be made. I love what you are doing here, Rebecca! This is absolutely the perfect sort of creation for someone such as yourself. I can’t wait to hear about and see what you are going to do to Emma Grace’s room! Why have I not been consulted in this matter?! Love to you, Friend! Add more details on the plan soon. 🙂

Hi, Lynne! Thanks so much for reading and commenting! Yes, you can post anonymously now, but I just made that change yesterday, so that wasn’t the case when Beth first wrote.

I’ll write to you of our decorating plans, and keep watching here to see the work progress!

“Chunks of Evil” is a reference to “Time Bandits”… “MOM! DAD! DON’T TOUCH IT! IT’S EEEEVIL!!”Thank you Janke.